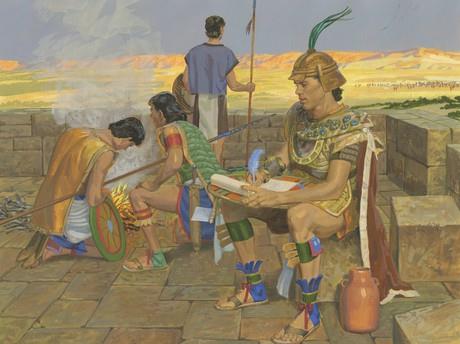 It's New Years time again. That introspective time where we reflect over the past year and resolve that this year we are surely, most definitely going to start that novel, get that promotion, pay off that credit card, and lose that gut. Oh yeah, and world peace.

Like everyone else, I've been thinking about what I want to do this year. But more importantly, what I want to become this year. Something that stuck out to me as I thought about this was a story I read recently from Alma 55.

In this chapter, the Nephites were locked in a desperate struggle for survival against the Lamanite armies, led by power-hungry Nephite dissenters. Towards the end of this long, horrible conflict, Captain Moroni received a letter from the wicked king Ammoron, offering to trade prisoners. The terms of the exchange were an entire family of Nephite prisoners in exchange for each individual Lamanite prisoner. It seems like a pretty generous offer. In fact, it's the terms that Moroni himself proposed not long before. It sounds like Moroni was getting a pretty good deal.

However, Ammoron also made it clear in his letter that he was not going to cease his attacks. In fact, he vowed to use the returned Lamanite prisoners to continue his war against the Nephite nation, the Chuch, and freedom in general.

What was Moroni to do? I mean, Ammoron is effectively a terrorist, so it seems wrong to strike a deal with him. But on the other hand, Moroni was pretty lucky that Ammoron agreed to the "family for a soldier" condition. And rejecting the trade would further imperil the lives of the innocent Nephite families in the Lamanite prison camps. And it's really expensive for the Nephites to keep housing and feeding the Lamanite prisoners, so Moroni really wants to get them off his hands. And it's not really realistic to expect Ammoron to agree to an armistice right now, right? It seems like the Nephites are getting the better end of the deal, so why give up this opportunity to strengthen his forces? What's the harm in a little compromise if it will strengthen your side?

Our own modern-day prisoner exchange situations

As I read over this story, I tried to imagine situations in our day-to-day lives where we might find ourselves in the same dilemma as Moroni. Situations where we are offered the opportunity to compromise something seemingly small for what appears to be a net gain in the long-run. Here are a few that I came up with off the top of my head:

I have been in all these situations (or variants of them). There are no good answers most of the time. They are tricky situations. It doesn't seem black and white in the moment. You think you know what you would do in the ideal circumstances, but you worry that the "right" thing would ultimately be a bad thing in the long run and ultimately cripple someone's perceptions of the both you and the Church.

In the moment, it's really hard to see how you could accomplish a long-term net good if you're going to be such a Puritanish stickler over the immediate small stuff. Maybe we just need to be flexible on the smaller commandments in order to keep the larger ones. Like when Christ criticized the Pharisees for "straining at gnats" while neglecting "the weightier matters." Or when God told the Saints in this dispensation to "make unto yourselves friends with the mammon of unrighteousness, and they will not destroy you." A little bit of flexibility goes a long way, right?

I wonder if Moroni struggled with this argument. I wonder if his chief captains pitched these ideas at him when they counseled together about what to do. I wonder if they pleaded for their wives and daughters in the camps. I wonder if they reminded him that this is a war– not a chapel and how they needed "commander in chief"– not the "pastor in chief."

We don't know if or for how long Moroni struggled over what to do, but we do know his final decision:

Now it came to pass that when Moroni had received this epistle… he said: Behold, I will not exchange prisoners with Ammoron… for I will not grant unto him that he shall have any more power than what he hath got.

I believe the argument to be "flexible" and compromise the "small things" so we can accomplish the "greater good" is one of the most effective tools Satan uses on active Church members. But Moroni understood that any compromise with evil– no matter how small– would be yet another critical hit to their only decisive advantage over the Lamanites: the support of their God. He knew that the only way to maintain the integrity of the Nephite nation was to "not grant unto [Ammoron] that he shall have any more power than what he hath got."

I'm not saying I know the answer to all the situations I listed above. I guess it depends on the circumstances. That's where the Holy Ghost comes in. He gives us individual guidance on how to handle tricky situations like that without violating our standards. But the option to compromise on our behavior never the right answer. Someone posted a long critique of an earlier post, telling me such an uncompromising philosophy is "toxic perfectionism." Some call that uncompromising philosophy unrealistic. Some call it "unhealthy absolutism." This philosophy is attacked by people both inside and outside the Church. But God has a different name for this pattern of behavior. He calls it "obedience," "duty," and "responsibility."

We are responsible to the Lord. We are to be true and faithful and live by every principle and doctrine that He has given to us. We cannot compromise a revelation or a commandment committed to our charge. He trusts us to "build up the kingdom of God, and to establish his righteousness."

Moroni knew that you cannot compromise with evil. If you do, evil always wins… The Church must not compromise standards before popular demands."

Of course, we will face fear, experience ridicule, and meet opposition. Let us have the courage to defy the consensus, the courage to stand for principle. Courage, not compromise, brings the smile of God's approval.

Nephi taught that "the Lord giveth no commandments unto the children of men [even the 'small' commandments], save he shall prepare a way for them that they may accomplish the thing which he commandeth them." Moroni's decision was proof of that. The way God prepared for Moroni was nothing short of a miracle. Because of Moroni's decision not to exchange prisoners with Ammoron, Moroni was eventually able to free all the Nephite prisoners without a single loss of life. He re-captured one of the lost Nephite cities in the process. The prisoners he freed strengthened his own army. The Lamanites he captured weakened the Lamanite army. And the Lamanite prisoners the Nephites were guarding eventually voluntarily took a covenant of peace joined the people of Ammon, freeing up the Nephite guards to help Moroni in his military ventures. Moroni and the Nephite armies were blessed with many tremendous, decisive victories because Moroni was not willing to compromise, even on something that, at the time, seemed like a net good and the best option on the table.

We won't see miraculous results every time we choose the harder right. Maybe we will offend someone. Maybe that will have negative ramifications for us. Maybe, it might even harm or ruin that person's opinion of the Church for the rest of their mortal life. That's entirely possible. We know we will sometimes pay the price of sticking to our standards. But as we stand firm in our resolutions, God will open up an unseen third option we didn't know existed, and provide the way for us to hold fast to what we know is true. And as we press forward with our convictions, we will become more and more like Captain Moroni:

Yea, verily, verily I say unto you, if all men had been, and were, and ever would be, like unto Moroni, behold, the very powers of hell would have been shaken forever; yea, the devil would never have power over the hearts of the children of men.

Upping the ante on our New Years resolutions

I have some New Years resolutions. I want to be more kind, more soft-spoken, more patient, more forgiving, more friendly, more charitable. I want the love of Christ to shine brightly through me. I want to lift more, help more, and serve more.

Hopefully, you do, too.