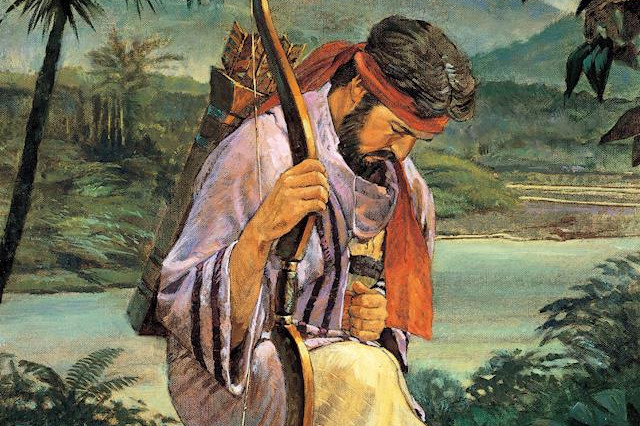 Asking questions when we already know the answer

I read the Book of Enos again the other night and realized something: Enos’s wrestle with God in the woods doesn’t seem to have told him anything he didn’t already know. Let me explain.

Enos had a testimony of the Atonement, but he asked anyway

What do we know about Enos? We know he was probably a descendant of Jacob, the brother of Nephi. Whether he was Jacob’s son, grandson, or something else a really interesting unresolved question. But regardless of whether Nephi’s brother Jacob is Enos’s father, we do know this about his father: he was “a just man,” teaching his son “in his language, and also in the nurture and admonition of the Lord,” speaking “often… concerning eternal life, and the joy of the saints.” So if his father was not Nephi’s brother, he at least was the same type of righteous father– bringing his children up in light and truth.

And I don’t think it’s a stretch to say that Enos was probably cut from the same cloth as his family. I’ve heard some Sunday School lessons that have tried to paint him as a bad kid, like Alma the Younger, who is only brought into the fold because of a powerful experience resulting from a faithful father. But I don’t get that feeling reading Enos’s story. We don’t know the exact state of his testimony at the time of his experience, but we read that he had faith “in Christ whom [he has] never before seen nor heard,” and that faith was like the faith of his fathers (Lehi, Nephi, Jacob, etc). His faith was sufficient to power him through a marathon prayer spanning many hours, gives him a conviction that God is there and “cannot lie,” and ultimately is the reason he is cleansed of his sins and can commune with God. So he seems like a pretty good guy to me– not exactly an Alma the Younger experience.

So when God visits him with forgiveness, although may have never experienced it in the same dramatic fashion before this prayer in the woods, I imagine that Enos was at least intellectually very aware of the pattern of repentance and promise of forgiveness through the Atonement of Christ. So even though feeling that assurance must have been a powerful experience, ultimately he isn’t recording that he learned anything new from that. And I doubt he was surprised when he asks “Lord, how is it done?” and the Lord responds “Faith.”

Enos knew about the promised blessings for the Nephites, but he asked anyway

After securing his own salvation, he prays for the salvation of his brethren, the Nephites. God responds by telling him He would fulfill the covenant He made to Lehi and his posterity when they landed here. Namely that if they keep the commandments they will prosper and if they turn away from God, they will be destroyed. So, again, nothing new there.

Enos knew about the promised blessings for the Lamanites, but he asked anyway

The next part is interesting. Enos prays for the Lamanites, but note the very specific nature os his request:

And now behold, this was the desire which I desired of him– that if it should so be, that my people, the Nephites, should fall into transgression, and by any means be destroyed, and the Lamanites should not be destroyed, that the Lord God would preserve a record of my people, the Nephites; even if it so be by the power of his holy arm, that it might be brought forth at some future day unto the Lamanites, that, perhaps, they might be brought unto salvation.

Basically “So God, if by chance in the distant future my people turn wicked and are destroyed, but the Lamanites are not destroyed with them, will you preserve a record of us that contains the fullness of the Gospel and bring it to them in the future?”

Wow, spoiler alert. Why would Enos think to pray for such a specific blessing to answer such a specific circumstance? It’s almost like he knew exactly what would happen. I suspect he did. Nephi, his uncle (or great uncle or great-great uncle or something) saw that exact situation play out in his landmark vision before they even built the boat that would take them to the promised land. And Nephi saw that the Book of Mormon was exactly the Lord’s promised answer for that exact future. Assuming that Nephi shared that vision with his posterity, then it seems likely that Enos is praying for God to simply fulfill the promise he made in Nephi’s vision. I can almost pick up a hint of loving rebuke when the Lord reminds Enos, “Thy fathers have also required of me this thing; and it shall be done unto them according to their faith.”

Why we ask for things that are already promised

We obtain blessings for ourselves

Think of the blessings in the Abrahamic covenant. We learn from the Pearl of Great Price that Abraham wasn’t the first to be promised the blessing of a choice and numerous posterity. He sought the blessings of his forefathers. And his children each individually wrestled with God (in Jacob’s case, somewhat literally) to obtain the promise of those blessings for themselves, which is why they are often referred to as the blessings of “Abraham, Isaac, and Jacob.” And ultimately to everyone who stays faithful to the covenant path.

But just because everyone before you has received a promise that is to be fulfilled by you doesn’t mean that you don’t have to do your part to seek out that blessing for yourself, and it must be sought and promised individually. There’s a good chance your patriarchal blessing contains words reiterating that covenant to you, too. Are those wasted words, telling you something you already know? No. Even though it’s a right of everyone who follows Christ, God is making that promise to you individually.

We must learn the truth of all things

Think about the promise given in Moroni: “And by the power of the Holy Ghost, ye may know the truth of all things.” We often use that scripture when we talk about investigators receiving a witness of the Book of Mormon. Why? Because as “the keystone of our religion,” the veracity of the entire Gospel we declare and the Church which bears the Lord’s name depend entirely on whether the Book of Mormon is true. As the introduction of the book states:

Those who gain this divine witness from the Holy Spirit will also come to know by the same power that Jesus Christ is the Savior of the world, that Joseph Smith is His revelator and prophet in these last days, and that The Church of Jesus Christ of Latter-day Saints is the Lord’s kingdom once again established on the earth, preparatory to the Second Coming of the Messiah.

But Moroni’s’ promise is that we can learn the truth of “all things”– not just a confirmation that the Book of Mormon is true. I believe that it is our right to receive a personal, spiritual confirmation of all spiritual truths individually in addition to a general “the Church is true” catch-all. We have a testimony of the Gospel, and therefore of all the ordinances and doctrines of the Gospel. But we have the right to have a testimony of each one individually, too.

And I don’t think it’s faithless to ask for it. Enos was receiving a spiritual confirmation of individual truths he already knew at some level. I think that’s a good model to follow. Even if we have a testimony of the Gospel, it’s good to ask God once in a while, “I believe the Book of Mormon is true. It is, right? Did Christ really come? Is there life after this? Are you even there?” By so doing, I believe we will find stronger and stronger spiritual confirmation of these truths. Even if we think we already know them.