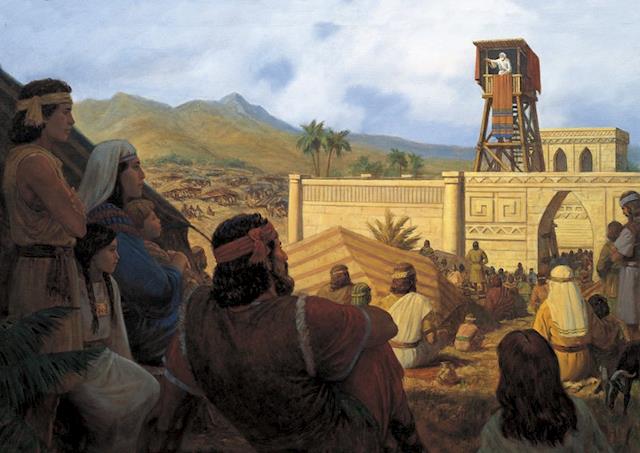 Not to trifle with the words

Shortly before his death, the righteous prophet/king Benjamin gathered together all his people to give them the instructions he had received from God. As I read through the account of this Nephite General Conference, I was impressed by the similarities to our own General Conference.

By this time, the Nephites “were a great number, even so many that they did not number them; for they had multiplied exceedingly and waxed great in the land” (Mosiah 2:2). They were so numerous that “king Benjamin could not teach them all within the walls of the temple.” So, it seems everyone waited around while someone built a giant tower for him to preach from. Think of how annoying it sometimes feels to deal with setting up and taking down folding chairs each week. Now imagine that you have to delay your Sacrament meeting while the Boy Scout troop builds a tower.

Compare this to the work that our Church leaders go through to successfully carry out a General Conference in our day. One General Conference involves hundreds of translators, ushers, and volunteers in the Conference Center. It involves a lot of setup in local meetinghouses by Bishoprics, Stake Presidents, and AV specialists. Arrangements are made to send the broadcast out by radio, television, and the internet. And satellite; we send the message into space.

Millions of dollars are spent every Conference to make sure the words of the Prophets and Apostles echo across every corner of the globe. And for most of us with the little always-connected computers we carry in our pockets, it would literally take effort on our part to not have immediate access to General Conference! In our day, we don’t have to pack our tents and journey to hear the Prophet– we just have to open the right app.

But even the elevated pulpit was not sufficient for the dying king’s voice to reach everyone. “Therefore he caused that the words which he spake should be written and sent forth among those that were not under the sound of his voice, that they might also receive his words” (v 8).

If you have never tried dictating something slowly enough that someone could write out what you are saying by hand, try it sometime. You will find that it takes an excruciatingly long time to get a single paragraph out. I think he wouldn’t have gone through that kind of hassle unless he thought it was vitally important that every single man, woman, and child be able to hear what he had to say during this multi-day conference.

Compare this to the effort that the Church goes through to transcribe all the messages of the General Conference and have the text and recordings available online a few days later. And printed in hundreds of languages in the Ensign and Liahona. And to use as material for years to come in Teaching for our Times lessons and Sacrament meeting talks.

King Benjamin delivered his Conference address shortly before his death. And it wasn’t easy for the dying king. He told the ancient Nephite Church members “behold that I am old, and am about to yield up this mortal frame to its mother earth… For even at this time, my whole frame doth tremble exceedingly while attempting to speak unto you; but the Lord God doth support me” (v 26, 30).

This point should be pretty self-evident. We love our General Authorities, and we know that the Lord God supports them, too. And their obvious love for us makes it painful for us to see the obvious discomfort and effort that these men go through to deliver us the word of God every 6 months. Sometimes, like King Benjamin, their frames literally start trembling during their General Conference address.

Knowing all the effort that God and His Prophets go through every 6 months to deliver the messages He wants us to hear, do we take this opportunity seriously? Are we, like the Nephites, gathered with our families, at the feet of the Prophet, paying close attention to that message? After all the trouble that King Benjamin went through to get on a tower and have his words carefully recorded, he told the Nephites:

I have not commanded you to come up hither to trifle with the words which I shall speak, but that you should hearken unto me, and open your ears that ye may hear, and your hearts that ye may understand, and your minds that the mysteries of God may be unfolded to your view.

Do we sometimes trifle with General Conference? When Conference weekend comes along, do we listen attentively? Or do we see it mainly as a week we can get out of town without having to find someone to cover our callings? Or maybe as just a Sunday we don’t have to get dressed up?

Please note that I’m saying we must be glued to our television sets all Saturday doing nothing but Conference. One of the most beautiful Conference memories I have is listening to the Saturday sessions in the car on a long day trip with my wife a few years ago. And Elder Holland told of a beautiful experience one sister had of listening to Conference on the radio as she hiked one Saturday. It’s not that we must be confined at home all Saturday, but I am saying we must make every effort to participate, wherever we are and whatever we are doing. As Elder Holland expressed in that same talk, “As Latter-day Saints, wherever we are or whatever we are doing, we stop and listen.”

General Conference is important. It is not trivial. It is not “optional.” It is not to be trifled with. Because of various circumstances, we may not be at home or in the chapel for every session, but we are guaranteed to have every session available to us both when it broadcasts, and within a few hours thereafter. Let’s not miss out on the opportunity to hear living prophets. If we treat our modern General Conference as seriously as King Benjamin exhorted his members to treat the General Conference of their day, we have the same promise he extended to the Nephites, namely that the “mysteries of God [will] be unfolded to [our] view.”