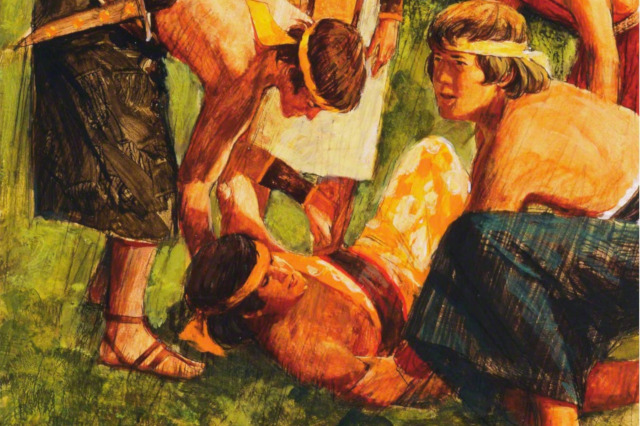 Rejoice in the trials of the wayward

Sometimes the scriptures are funny. Here’s one example: Alma the Younger. He and his gang of “bishop’s kids” were always causing all sorts of shenanigans and making their parents’ jobs much harder. They were getting into some pretty serious transgressions: preaching false doctrines, encouraging pride, leading many away from the Church, and pretending they’re not home when their ministering brothers came by. Then one day while they were out and about (probably on their way to decorate a local ziggurat with toilet paper or something), they were “touched by an angel.” The angel shook the ground just hard enough to shake some sense into them. Alma the Younger collapsed into a coma, and his homies lugged his limp self back to his dad’s house and dumped him on the floor.

I imagine at this point, Mrs. Alma the Elder went into full Mom mode. “Oh, my poor sweet baby boy! Oh, his hands are so cold! Omner, can you go into his bedroom and grab his blanket for me? It’s OK, Alma, we’ll get you feeling all better, it’s OK, it’s OK, mommy’s here.” But I love the way his dad (the prophet) reacted to this:

And they rehearsed unto his father all that had happened unto them; and his father rejoiced

He rejoiced to find his unconscious son dragged home. Maybe because this time it wasn’t the police bringing him home and he wasn’t unconscious from drinking too much. When the sons of Mosiah rehearsed what happened, I imagine Alma’s initial rejoicings included a little bit of told-you-so:

“Well, look what happened to the ‘tough guy’ and his ‘cool’ friends! Not talking back to your mother and me now, are you, big man? Let’s see you try and sneak out after curfew while you’re unconscious! I told you once, I’ve told you a thousand times if you don’t shape up either God will put you in a coma, and if God doesn’t then so help me, I will. But did you listen? No, because I just don’t understand you, right? I’m just so far behind the times, right?”

And then Alma the Elder invited the entire ward to come gloat over his son, too:

“Hey everyone, come on over to my place and see my son. God knocked him into a coma!” I imagine something in between a missionary open house and a funeral: everyone pouring into the prophet’s house to gloat over his unconscious son finally receiving some much-needed divine comeuppance.

Of course, we know Alma the Elder wasn’t just gloating over his son. After all, he had walked the thorny path of severe repentance himself. He had also been “harrowed up” by his sins and had to turn 180 degrees to find his way back to God. He knew that his son was going through a difficult path right now. He was not rejoicing in his son’s pain– he was rejoicing in his son’s upcoming joy “as exceeding as was his pain.” He was rejoicing that his son would now become a help to the Lord’s work instead of a hindrance.

But here’s a question: what if Alma the Younger had never woken up? What if Alma Jr just didn’t have it in his heart to fully repent? I mean you’d think that an angel should be sufficient to inspire a change of heart, but as I talked about in January, that’s usually not the case. What if Alma the Younger had not repented and been “destroyed” as the angel had threatened? I think Alma the Elder still would have been happy. Or at least at peace with that. Here’s why: we see a similar story in Ether 10.

Shez was a righteous king. He “remembered the destruction of his fathers,” he “began to build up again a broken people,” and he “did walk in the ways of the Lord.” The Jaredites really needed a righteous leader at that time, and he did a great job. But like Alma the Elder, Shez also had a bad apple in his bunch. Like Alma, this bad apple was even named for his father. And like Alma the Younger, Shez the Younger was proving to be a huge hindrance to all that his father was trying to accomplish among the people. But unlike Alma the Younger, Shez Jr (presumably) didn’t have it in him to repent in this life and become a tool in the Master’s hand. So he was not given the chance:

And his eldest son, whose name was Shez, did rebel against him; nevertheless, Shez was smitten by the hand of a robber, because of his exceeding riches, which brought peace again unto his father.

Notice that father Shez did not “rejoice” in what had happened to his son like Alma the Elder did. But it did bring him peace. How? Because Shez loved the Lord more than he loved his son. He knew that God was protecting his people and that even his son’s death would be for his son’s eventual, eternal good. Maybe his son was so wicked that leaving him alive on earth to further corrupt his soul would have been unmerciful. We don’t know why, but we do know his father was filled with peace when his son was killed because he trusted in the Lord.

I think it’s instructive to contrast the story of Shez with King David. King David’s son Absalom, like Shez Jr, also rebelled against his father and tried to take the throne. But when Absalom was finally killed, did David rejoice like Alma or find peace in the Lord like Shez? Did he mourn that things had to come to this? No. Even though Absalom had killed David’s other sons, defiled his wives, and tried to destroy everything David had done, David mourned for no one but Absalom. The kingdom was finally saved, peace was finally restored, but David would not be comforted. His chief officers called him out on it, too, chiding him:

Thou lovest thine enemies, and hatest thy friends. For thou hast declared this day, that thou regardest neither princes nor servants: for this day I perceive, that if Absalom had lived, and all we had died this day, then it had pleased thee well.

I don’t think it would be a stretch to say that at that point in time, David loved Absalom more than any of his other children, more than his people, and maybe even more than the Lord Himself.

Bringing it home to us

It’s that perspective that made all the difference between Shez and Alma on the one hand and David on the other. And that’s what can make all the difference in our lives when we face similar situations. When those we love are corrected (sometimes harshly) by divine intervention, it can hurt. After all, who wants to see their child or a friend go through such things? But if we maintain an eternal perspective, we can rejoice in the doings of the Lord and find peace even in the midst of those hardships. And when we are the ones being corrected and shaped, we can react as Elder Klebingat invited us to:

Try to force a smile, gaze heavenward, and say, “I understand, Lord. I know what this is. A time to prove myself, isn’t it?” Then partner with Him to endure well to the end.