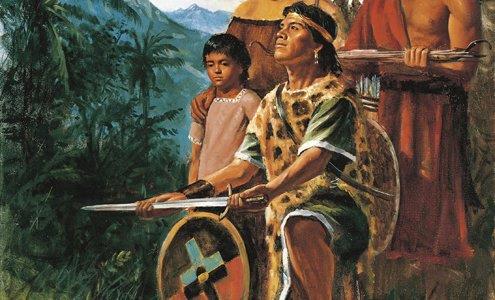 For the fathers who aren't there (re-run)

I’m going to be enjoying Father’s Day with my family. Enjoy this post from last year about the importance of appreciating fathers who aren’t there to guide their children… at least, not on this side of the veil.

We all know the story of the stripling warriors. “They had been taught by their mothers, that if they did not doubt, God would deliver them.” They bore their testimony to the prophet Helaman that “we do not doubt our mothers knew it.” The story of those 2000 young men is a powerful testimony of the impact of righteous women on the rising generation. You almost definitely heard the story recounted in Sacrament meeting just one month ago on Mother’s Day.

So what do they have to do with Father’s Day? Because of this question: where were the dads? Why do we hear of their amazing, faithful mothers but little mention of their fathers?

Recall back one generation to when the stripling warriors and their families were originally Lamanites. Along came the sons of Mosiah on their missions. Within the space of a few short years seven of the Lamanite lands on the western side of the country, the capital city, as well as the king over all the Lamanites had been converted to the Lord. They rejected Lamanite philosophy, took upon them a new name as a new people, and established a friendly relationship with the Nephites.

This was certainly alarming to the rest of the Lamanites and the hardened Nephite dissenters living among the Lamanites in the eastern part of the land. It must have seemed that their culture, their government, their philosophies, and their entire way of life were being destroyed by the religion these missionaries and their converts had established throughout the land. As usual, it was the hard-hearted Nephite dissenters who stirred them up in anger. Unrest grew, and when the king passed away in Alma 24, leaving the kingdom to his Christian son, the rest of the country fell into a coup. They gathered their weapons and marched toward the land of Ishmael to dethrone the new king and destroy the religious fanatics.

When those faithful new converts got word of the approaching army, they feared. Not the army, but that by fighting against them, they would fall back into the violent sins of their past. So they buried their weapons of war in covenant to God that they would never fight again. Alma 24 details the bittersweet results of that encounter.

So what does this have to do with the stripling warriors and their fathers? Here’s my theory:

Consider that in all of Alma 24, the brave souls who met the oncoming horde are referred to as “men,” “man,” “brethren,” etc. Yes, I know that the Scriptures generally use the term “men” to refer to the whole human race– not just “males.” But I think in this case, I think it actually means only men. After all, the men were the warriors. The men were the providers and the protectors. And I suspect that it was the men kneeling on the field that day.

The fathers’ “battle” of Anti-Nephi-Lehi

In my mind’s eye, this is how that “battle” played out:

The new Christian convert men organized themselves for war just as they had always done. But this time, there were no weapons. There was no zealous, fiery hate speech to get the blood boiling. There was no stirring pep talk from the chief captains. Just some hymns, some inspiring words from the Scriptures, and a lot of tearful, pleading prayer.

As they heard the Lamanites approaching, they said their tearful goodbyes to their wives and children, then marched out in formation as they had done many times before. Arriving at the battlefield, they halted at the command of their leaders, then knelt down and began to pray. They prayed for their families, for their people, for the cause of the Gospel, and even for their enemies marshaled on the other side.

We don’t know exactly what Lamanite weapons were like. The Book of Mormon mentions rocks and stones, swords and cimeters, arrows and javelins. With our modern-day bias, we might picture sharpened, steel weapons like we see in King Arthur movies, soldiers galloping by on horses, quickly dispensing his enemies with a single, quick thrust of the sword– dead before they even hit the ground.

But historians tell us that the ancient Mesoamerican peoples used weapons that were usually made of wood, bone, stone, or volcanic minerals. In fact, what the Book of Mormon calls a sword likely was just a sharpened wooden club with jagged stones and chunks of obsidian embedded in it.

In other words, a quick death was out of the question. These would-be martyrs knew that when they gave their life for the Gospel, it would be gruesome and drawn out. Thankfully, we are spared the gory details, however, the prophet Mormon does take a moment to note that these brave Christian men did “suffer death in the most aggravating and distressing manner which could be inflicted by their brethren.”

I’m sure that every instinct of these former Lamanite warriors was to fight back– to defend themselves as the blows came raining down. But instead, these brave men stood their ground, praying through the excruciating sounds of death all around them. They continued to pray even as they were surrounded by the horrifying sounds of their brothers, fathers, sons, neighbors, and friends being brutally murdered on every side. They continued to pray, even as their brethren broke their bones, crushed their lungs impaled their bodies, and violently beat the life out of them.

In the end, they were victorious. After slaying so many of those humble men of God, the attacking armies’ hearts were as swollen and broken as the corpses on the ground. The army withdrew, and many stayed behind to make amends however they could. The Book of Mormon records that the people took great comfort in the Gospel. But that does not change the fact that those good, Christian families went home that night having lost 1005 fathers, grandfathers, sons, and brothers.

For the fathers who aren’t there

So why did mothers get all the credit a few years later for having taught the stripling warriors of the next generation so powerfully? Perhaps many of the fathers of those young men were not around to teach them. Perhaps those warrior fathers were fighting alongside their stripling sons years later from the other side of the veil, protecting them and keeping every single one safe to return home to their faithful mothers.

Like I said, this is just my theory. But if it is true that many of the stripling warriors grew up without a father at home, it makes it especially poignant that they developed such a close relationship with their prophet and Captain Helaman that they called him their father, and he called them his “little sons.”

We celebrate fathers today. We bring them breakfast in bed, give them ugly neckties and hand-drawn cards, and hand them brownies or chocolates after Sacrament meeting. And they deserve it. But let us take a moment today to reflect on the fathers who aren’t there. And maybe find a way to be a father figure to those young men and women who don’t have one. Remember, the little kid in the background on the left became a mighty warrior in the foreground on the right.