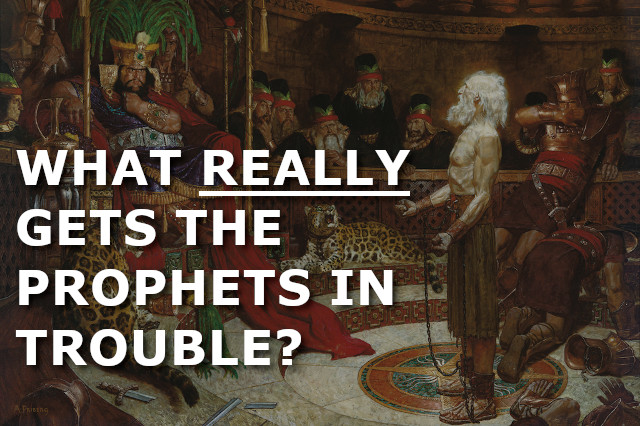 What REALLY gets the prophets in trouble?

It's no secret that the world rejects the prophets. I mean, after all, a prophet's job is to share the uncomfortable truth about what we're doing wrong and call us to repent, right? Not exactly a comfortable message. But looking in the Book of Mormon, time and time again, you see that the threats and the condemnation and the calls to repentance are usually not the main reason people get angry at the Lord's prophets.

Let's start with the example of Lehi. He opened his mouth and preached to the Jews, and got in hot water. But pay attention to what exactly he said that got him into hot water:

And when the Jews heard these things they were angry with him; yea, even as with the prophets of old, whom they had cast out, and stoned, and slain; and they also sought his life, that they might take it away.

Did you catch that? Testifying of their wickedness and warned of destruction earned Lehi mocking and derision. But then he started talking about "the coming of a Messiah, and also the redemption of the world." It was "these things" that turned mocking into attempted murder.

Now let's look at Abinadi. He had some rough words to say about the wicked King Noah. Lamanites would come and destroy the people, the king's life would be valued like a cloth in the furnace, and destruction would rain down on the people until they were enslaved. A pretty bleak picture, right? But when he was arrested and arraigned before King Noah's sham court, it was not the threat against the king's life or the people that earned him the death sentence. After days of deliberation and frantic searching for some semi-legitimate reason to kill Abinadi, the king and his priests announced:

Abinadi, we have found an accusation against thee, and thou art worthy of death.

For thou hast said that God himself should come down among the children of men; and now, for this cause thou shalt be put to death.

Decades later, after Abinadi's martyrdom and the fulfillment of his prophecies of enslavement, the descendants of King Noah's people lamented the decisions of their forefathers:

A prophet of the Lord have they slain; yea, a chosen man of God, who told them of their wickedness and abominations, and prophesied of many things which are to come, yea, even the coming of Christ.

And because he said unto them that Christ was the God, the Father of all things, and said that he should take upon him the image of man, and it should be the image after which man was created in the beginning; or in other words, he said that man was created after the image of God, and that God should come down among the children of men, and take upon him flesh and blood, and go forth upon the face of the earth—

And now, because he said this, they did put him to death.

Again, it was not the predictions of calamities and destruction that got under their skin– it was the prophecies of Christ that riled up the government enough to burn Abinadi to death.

The sons of Mosiah

We are familiar with Ammon and the other sons of Mosiah who served in the Lamanite South Mission. We like to focus on Ammon because he was so successful. But his other brothers (Aaron, Omner, and Himni) did not have that level of success initially. It was "their lot" to end up in some difficult zones full of apostates. You would think the apostates would have a lot to hate about his message. But pay attention to what it was that got them really angry and eventually landed Aaron and his brothers in jail:

And it came to pass as he began to expound these things unto them they were angry with him, and began to mock him; and they would not hear the words which he spake.

Prophets right before the coming of Christ

When preaching from his garden tower only a few years before Christ's birth in Bethlehem, the prophet Nephi served up the classic prophet two-message combo: call out the wickedness and prophesy of Christ. Anticipating the peoples' reaction to his message of Christ, he reminded them of their history, how "our father Lehi was driven out of Jerusalem because he testified of these things" but he didn't stop there. It was more than just Lehi:

[Moses] hath spoken concerning the coming of the Messiah… Yea, did he not bear record that the Son of God should come?… And now behold, Moses did not only testify of these things, but also all the holy prophets… Even since the days of Abraham there have been many prophets that have testified these things; yea, behold, the prophet Zenos did testify boldly; for the which he was slain.

As if taking this to heart, when the sign was promised by Samuel, the non-believers set aside a particular day by which they would slay the believers if the sign were not given. They were ready to wipe out a sizable chunk of the population not for insurrection, disloyalty, or treason, but for believing in the coming of Christ. Of course, the sign was given, and the nation became converted… for a few minutes anyway. Just a few years before Christ was baptized by John in the Old World, the Nephites in the New World were repeating the same pattern:

And there began to be men inspired from heaven and sent forth, standing among the people in all the land, preaching and testifying boldly of the sins and iniquities of the people, and testifying unto them concerning the redemption which the Lord would make for his people, or in other words, the resurrection of Christ; and they did testify boldly of his death and sufferings.

Now there were many of those who testified of the things pertaining to Christ who testified boldly, who were taken and put to death secretly by the judges.

Again, the corrupt judges and lawyers were plenty irked by having their sins called out from the rooftops, but it was the prophecies of Christ that boiled their blood enough to kill the prophets.

I don't really have anything profound to share other than that. Not a lot of commentary or observations this time– just that this is a theme I've noticed throughout the Scriptures and especially throughout the Book of Mormon. Why is it that the wicked roll their eyes when they are called to repentance and threatened with destruction yet get angry and even violent when someone starts preaching the comforting doctrine of a Redeemer? It doesn't make any sense to me. But if I could think of anything, I guess I would offer this as one more evidence of the reality of Satan. He can't stand the plan of salvation. He can't stand the mention of Christ. So while Satan's followers may put up with doomsday prophecies in the name of tolerance, he cannot let anyone speak of his Enemy without coming out unscathed.