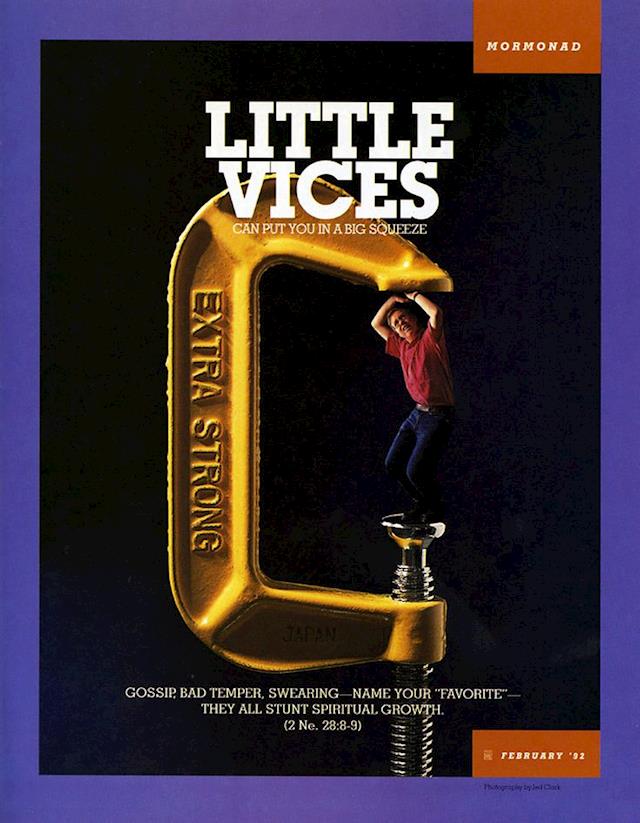 It's never just a little

A few particular points of the law

In 67 or 66 BC, the Nephites had things pretty good. As far as the military goes, they'd been winning wars left an right. And they didn't even lose a single soldier in the most recent battle. Plus, things were great at home, too. They'd built a lot of cities and there were peace and prosperity in the land:

Nothing could go wrong! I mean, sure, there was a land dispute Moroni had to resolve, but aside from that minor skirmish, everything seemed to be going really well leading up to Alma 51:

Then the chief judge, Nephihah, died. His righteous son, Pahoran, was appointed to take his place. Most everyone was fine with the change in regime, but a few folks in verse 2 wanted to adjust some things in the government first:

There were a part of the people who desired that a few particular points of the law should be altered.

So they sent a petition up through the levels of the government, asking Pahoran if he would implement their "few particular points." But Pahoran doesn't seem to care:

But behold, Pahoran would not alter nor suffer the law to be altered; therefore, he did not hearken to those who had sent in their voices with their petitions concerning the altering of the law.

Totally rude! What good are elected officials if they're not going to listen to our ideas, after all? How could Pahoran just dismiss them like that?

I imagine Pahoran opening their letter and thinking, "A few particular points of the law, huh? Let's see what they have in mind. Maybe adjust some taxes? Change the speed limit on the Jershon highway perhaps? I hope it's not a giant infrastructure package– heaven knows Moroni is spending a lot on those walls at our borders, and I don't think the Lamanites are actually going to pay for it. Let's see what these 'few particular points' are, exactly…"

I imagine him reading the details of their proposal and learning that "they were desirous that the law should be altered in a manner to overthrow the free government and to establish a king over the land."

Yeah, nothing big– just the overthrow of the government and the establishment of a dictator!

These king-men wouldn't back down, either. They rebelled against the government. Granted, there's never a good time for in-fighting, but, this period in Nephite history was an especially bad moment for internal conflict:

This was a critical time for such contentions to be among the people of Nephi; for behold, Amalickiah had again stirred up the hearts of the people of the Lamanites against the people of the Nephites, and he was gathering together soldiers from all parts of his land, and arming them, and preparing for war with all diligence; for he had sworn to drink the blood of Moroni.

This proposal to alter "a few particular points of the law" resulted in a civil war among the Nephites right as Amalickiah began his second round of attacks. A large swath of the country fell into enemy hands. Turmoil from these king-men pushed the nation to the brink of extinction within a few months.

This isn't the only time in the Book of Mormon where "a few particular" seemingly small bad things had disastrous outcomes:

A small number of men

This whole Lamanite conflict began because Amalickiah had a Simba complex. he just couldn't wait to be king. When he and his followers saw that the people weren't going to go for that, they made a mad dash for Lamanite country. Moroni managed to largely cut them off. But a handful got away. "Amalickiah fled with a small number of his men."

That "small number" of men (which apparently included his equally twisted brother) resulted in many years of bloody conflict for both sides, and the majority of the Book of Mormon's war chapters.

A little pride; a little dissension

Once the Lamanite wars had finally concluded, everything was relatively peachy again. "There was no contention among the people of Nephi… (dramatic pause)… save it were a little pride which was in the church, which did cause some little dissensions among the people."

Though "small," the dissensions of that time led to a near civil war and the mass migration of "an exceedingly great many" out of the land, the strengthening of the Gadianton robbers, and resulting in another round of wars.

A small part of the people destroyed all the people

When thinking over Nephite history, we often say that there were 400 years of peace and prosperity following the coming of Christ and then everything went to pot and they were all wiped out. But really, the seeds of that ultimate destruction were sprouting hundreds of years before the final battle at Cumorah. Only one generation, after Christ's resurrected ministry to the Lehites, there were "a small part of the people who had revolted from the church and taken upon them the name of Lamanites; therefore there began to be Lamanites again in the land."

This "small" part of the people grew and grew until the Nephites were extinct two generations later.

There are dozens more examples of this theme in the Book of Mormon, but I think the point is clear. God works by small and simple means. In a way, so does Satan. He will take the tiniest toehold we give him and do his absolute best to destroy us with it. So on the one hand, God tells us, "these commandments may seem small, but they will have a tremendous impact on your life." On the other hand, Satan lies to us, saying, "these compromises are also, small, and they will never have any impact on your life."

Have you ever wondered why our Church is sneered at for being alarmist, perfectionist, and completely uncompromising? This is why. We are trying to learn the lesson the Nephites never learned. We are trying to learn that in it's never just "a small number" of wicked men. It's never just "a little pride." There are no such things as "little dissensions." There is no "small part of the people" that can fall away without bringing destruction upon the rest. And when it comes to God's laws, we only need to compromise on "a few particular points" to find ourselves very stuck, very soon, in very big trouble.

When it comes to wickedness, it's never, ever just "a little."